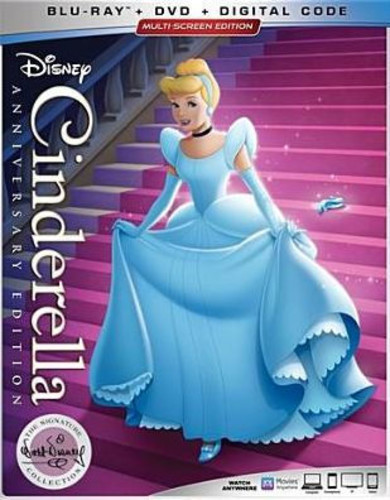 Cinderella Signature Collection - Now part of the Walt Disney Signature Collection and the prestigious National Film Registry, Disney's animated classic CINDERELLA is beloved by generations of fans for it's timeless story, unforgettable characters and iconic artistry. Share the magic as kind and hardworking Cinderella is rewarded with an enchanted evening at the Royal Ball. It just takes the help of her loyal animal friends Jaq and Gus, a wave of her Fairy Godmother's wand and some 'Bibbidi-Bobbidi-Boo.' Celebrate the legacy of Disney's classic animation in CINDERELLA, where dreams really do come true! The public made CINDERELLA one of the highest-grossing films of the year and Disney's most successful release since BAMBI. In fact, it was one of the top-grossing films of 1950, pulling in $4 million during it's initial release. Animators were having trouble drawing Lucifer the cat in CINDERELLA when Walt Disney saw animator Ward Kimball's cat, a furry calico, and declared, 'There's your Lucifer.'