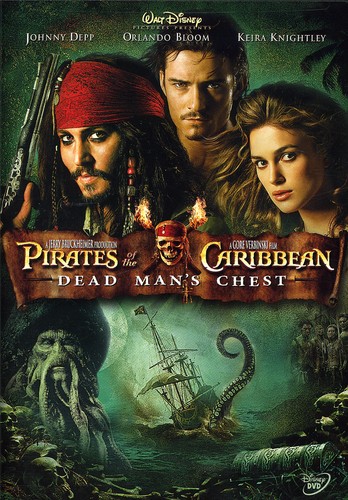 Pirates of the Caribbean: At W...

The second part of a trilogy, PIRATES OF THE CARIBBEAN: DEAD MANS CHEST is a fantastic tale of pirates, love, and the supernatural. Blacksmith Will Turner and his upper-class love Elizabeth Swann are preparing to wed, when they are confronted with a warrant for their arrests because they helped the notorious pirate Captain Jack Sparrow escape the authorities. Their only choice for a pardon is to find Jack and return to Lord Cutler Beckett with the flamboyant captain's compass. Will's attempt to track Jack down, however, is an adventure unto itself. Director Gore Verbinski Star Johnny Depp, Orlando Bloom, Keira Knightley Special Features: Widescreen, commentary 150 Minutes.