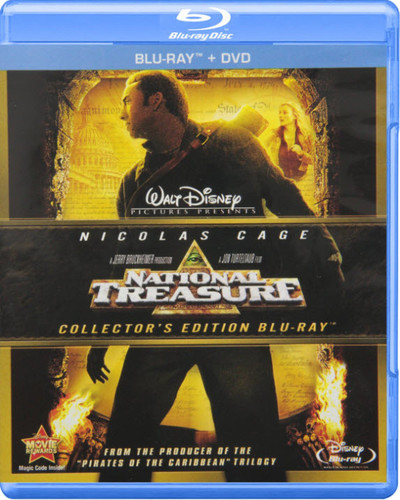 Blu-ray/DVD COMBO from Jerry Bruckheimer, producer of PIRATES OF THE CARIBBEAN, and Jon Turteltaub, director of PHENOMENON, comes NATIONAL TREASURE. It's the thrilling, edge-of-your-seat adventure starring Academy Award winner Nicolas Cage as Benjamin Franklin Gates. Ever since he was a boy, Gates has been obsessed with finding the legendary Knights Templar Treasure, the greatest fortune known to man. As Gates tries to find and decipher ancient riddles that will lead him to it, he's dogged by a ruthless enemy (Sean Bean, THE LORD OF THE RINGS trilogy) who wants the riches for himself. Now in a race against time, Gates must steal one of America's most sacred and guarded documents - the Declaration of Independence - or let it, and a key clue to the mystery, fall into dangerous hands. Heart-pounding chases, close calls, and the FBI turn Gates's quest into a high-stakes crime caper and the most exciting treasure hunt you've ever experienced.