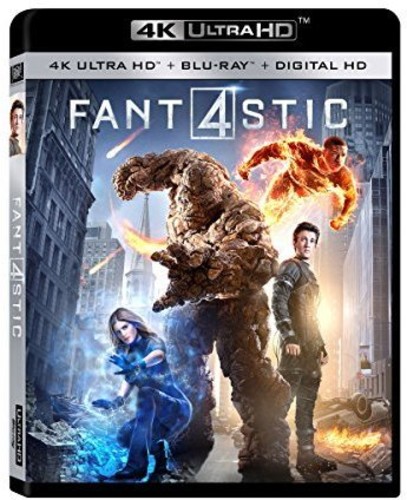 FANTASTIC FOUR - Four young outsiders teleport to an alternate and dangerous universe which alters their physical form in shocking ways. The four must learn to harness their new abilities and work together to save Earth from a former friend turned enemy. Fantastic Four (stylized as FANT4STIC) is a 2015 American superhero film based on the Marvel Comics superhero team of the same name. It is the third theatrical Fantastic Four film to be distributed by 20th Century Fox, and a reboot of the Fantastic Four film franchise. Directed by Josh Trank, who co-wrote the screenplay with Jeremy Slater and Simon Kinberg, the film stars Miles Teller, Michael B. Jordan, Kate Mara, Jamie Bell, Toby Kebbell, Reg E. Cathey, and Tim Blake Nelson. In Fantastic Four, the team must learn to harness abilities gained from an alternate universe to save Earth from a friend turned enemy. Development of the film began in 2009, when Fox announced plans to reboot the franchise. Trank was hired to direct in July 2012 and the principal characters were cast in January 2014. Principal photography began in May 2014 in Baton Rouge, Louisiana and lasted for two months. Dissatisfied with the production, Fox executives mandated reshoots, which took place in January 2015. Fantastic Four premiered at Williamsburg Cinemas in New York City on August 4, 2015. It was released on August 7 in the United States. The film received negative reviews from critics, and underperformed at the box office, grossing $168 million worldwide against a production budget of $120 million. It won three Golden Raspberry Awards for Worst Director, Worst Prequel, Remake, Rip-Off, or Sequel, and Worst Picture (the latter tied with Fifty Shades of Grey).